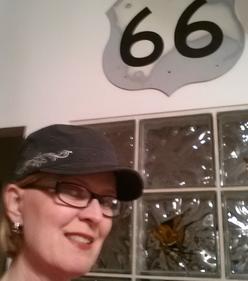 RED's RV Park in Wellston, OK, was named in memory of Shelley's father, Richard "RED" Whiting (1933-2012), nicknamed because of his red hair. Her dad passed away in November 2012 from complications from a stroke he suffered in October 2011. He traveled extensively along Route 66 and enjoyed the historical points of interest. Shelley and her dad traveled all over the United States, Canada, and even to Alaska, which was a very special trip! Shelley spent her summers traveling with her family to Roaring River, MO, and her family had an assortment of travel trailers. Some of the most favorite were a "Scotty with a Potty" and several Layton trailers. Later, her grandparents bought a 1973 Chevy C-Class, and she loved the cab-over bunk bed! (We will post some pictures down the road, on this page, of these special trailers, and we hope to be able to add some actual trailers to the RV park for others to reminisce about their own traveling days.)

The RV park has many improvements that include updated electrical services and new gravel. Shelley plans to restore the park back to what it was in the 1980's to include Red's Trading Post and a teepee that will be located over the new storm cellar. A collection of 1960-1970 era bubble trailers will be located in the park over the next few years.  Shelley hopes to make this a Historic ROUTE 66 stopping point for all nearby travelers to take a nice rest break and look around the park and take a walk down a traveler's RV and Route 66 memory lane!!

The next Chapter of the RV Park began in late 2016 when we found out about a Highway Project on 66  would end up taking the Original RV Park and closing that Chapter of history that started in 1980's.  WE have focused on opening a New RV Park on the backside of the old one that know belongs to the State.  We will be opening for business in May 2019 AND we are going strong!  Stop by and say hi!

Red's Rockin' RV Park was first developed in 1986 near Wellston, Oklahoma, OK, and had a teepee where currently there is a new, modern storm cellar. The current office building was WARD'S Trading Post.  WARD's sold souvenirs and oil paintings for several years. After WARD'S Trading Post closed in the 1990's, an addition was added onto the back of the building, and Faye's Chicken & More Restaurant opened up.  Faye Ward, the owner, cooked up some mighty fine, finger-licking-good fried chicken for many years until she passed away in 2004.

Thereafter, the restaurant closed, and her husband later sold the white house next door and the RV Park, known at this time as Ward's RV Park, to a gentleman who was driving past and fell in love with the property. In 2007, the new owner expanded the RV Park to include additional RV parking spots and established a variety store in the restaurant building called Rowdy Girls Accessories.

When the new owner passed away, the property went into probate and was put up for sale in November 2012.  Shelley Dobson of nearby Edmond, OK, had been investigating buying land to develop an RV park, and her neighbors told her about the West Wellston, OK, RV Park and the white house next door that were both for sale. Shelley made an offer, and after 5 months of waiting for the probate issues to be resolved, she took possession in May 2013 and started rehabbing the white house which dates back to 1918 and the RV park itself that had fallen into a state of disrepair. The newly revitalized park opened up for RV'ers on  June 18, 2013.